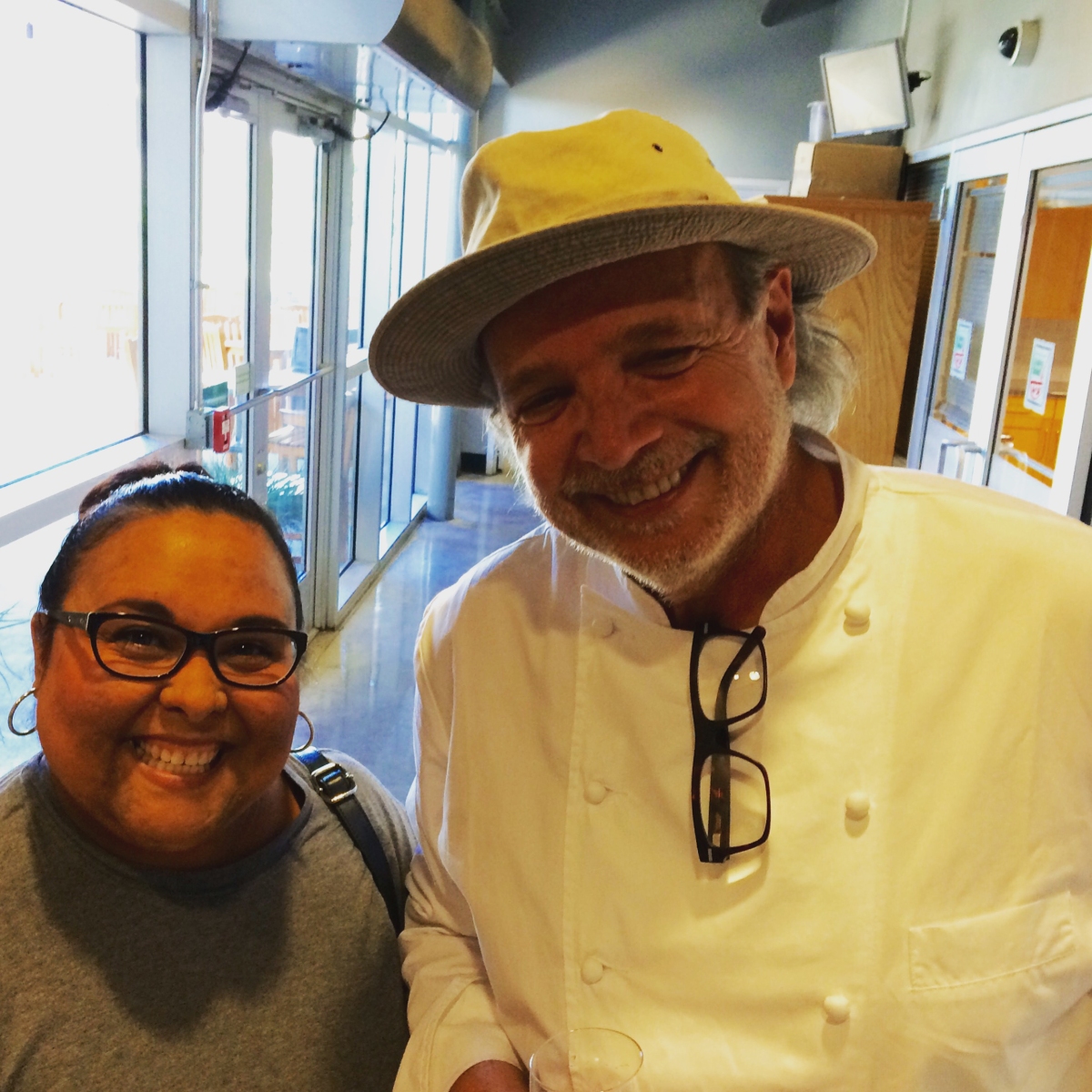 The last few days, I’ve been in a fog created by too much thinking and an overload of ideas. While that may sound very productive and possibly exciting to some, my general interpretation of this reoccurring event is like being strapped to a power grid for days with electricity coming out your ears and then having to sift through the lingering smoke to identify any remains of a usable thought. I get on these “I need knowledge” kicks and dive deep into culinary literature, documentaries, kitchen experiments and new restaurant discoveries. Most of the time, I end up with a new trick or two, a week’s worth of dirty dishes to clean and sometimes even something worthy to write. I start to think about everything I’ve ever dreamed of doing and then work backwards from there to illuminate my next steps from where I stand. And, for the first time in a while, yesterday the universe not only illuminated my steps but put a hand out to escort me over.

Just last week, my husband Bear and I decided to get Netflix. I know, VERY late to the party. We do Amazon Prime and never felt the need to add another subscription to our list. Anyway, the day before yesterday, I watched Chef, one of my favorite “feel-good and makes you want to make a grilled cheese sandwich afterwards” movies. P.S., my post-movie sandwich was crunchy, buttery, and amazing.

After the movie ended, Netflix auto-suggested a documentary series called Chef’s Table, the one everyone’s been buzzing about but I hadn’t seen since I didn’t have Netflix. What began as a curiosity quickly transformed into a profoundly intrinsic experience that left me desperate to latch back onto the power grid.

Essentially, for those who have yet to acquire Netflix (no judgement here), it’s a series focusing on chefs and their restaurants making a substantial impact on the culinary world in one way or another. They seek out the top restaurants in the world and bring light to the creation of their being. Season one highlights the journey of six iconic chefs, their gastronomic philosophies, creative insights, purpose, missteps and the reason behind their passion.

For anyone who just enjoys food and likes watching cooking shows, you might find this series fairly interesting. For those of you who live, breathe, work, and dream food, someone like me, this series will change your life. I watched all six episodes back to back. The first episode with Chef Massimo Bottura completely blew my mind and make me feel like a complete creative failure in life, all at the same time (in a good way), and somewhere around 3am, I got to the episode with Chef Francis Mallmann who, again, blew my mind then made me question some of my life decisions (in a good way) and flung me into the conclusion that true freedom is releasing those safe and invisible shackles which only you have the key to, so that you may fly as high as you’ve ever dreamed of flying.

“To grow and improve, you have to be there at the edge of uncertainty.” – Chef Mallmann.

After getting about two hours of food-filled dreams, I reached out to Chef Massimo Bottura and his wife Lara Gilmore via social media to which he generously and graciously replied with a retweet (in my excitement, I forgot to include the word “the” in my tweet, but he responded so quickly, I didn’t have a chance to delete and resend – yes, I’m justifying an error).

And shortly thereafter, I noticed another tweet in my feed, but this time, from Chef Francis Mallmann, the Argentinian culinary icon who had, just hours before, inspired me to stop holding myself back from any part of my food-inspired dreams.

Lo and behold, there was the hand of destiny, calling me to come over and experience what I would consider a chance of a lifetime, a moment to a) personally thank Chef Mallmann for sharing his inspirational journey with the world and b) capture that moment plus any words of wisdom from this legendary figure.

I was less than an hour away from the Central Market location and was determined to not let this opportunity pass me by for any reason. So, I called the location to inquire further about his arrival. After speaking with the operator, calling again to speak with a floor manager who then said I needed to speak with the culinary school manager, all I ended up with was the ability to leave a message. I called three more times only to find out finally from the operator that Chef Mallmann was actually there for a private event which is why I couldn’t find anything on their website about his arrival.

He had inadvertently posted his visit… or had he?????

At this point, I knew that only I could unshackle myself from the confines of “private event” and risk that uncomfortable and awkward status of “stalker.” How could I allow this moment, this right-in-my-backyard moment, to slip away!?!

Then, the phone rang. It was Michelle, the culinary school manager from Central Market returning my original message.

Could it be that the food gods were moving pieces in my favor???

“So, that’s why I have received so many messages,” she said. “I’m sorry; it is a private event.”

I begged for a window and asked about possibly catching him once the event was over or perhaps when he might have a scheduled break. And, there it was, “He might have a moment between 3pm and 4pm, but that’s no guarantee you’ll get to see him.”

That’s all the encouragement I needed.

It was just before 3pm, and I needed to hurry to beat traffic. Yoga pants, t-shirt and ponytail uniform ready, I called my friend Bianca to join, warning her there might be a slight chance of being removed from the premises. She’s a rule-follower, but in true friend fashion, she reluctantly agreed and got into my vehicle since I was already parked right outside to get her.

For whatever reason I decided to take a different route to Central Market and allow Bianca to navigate the heavily trafficked waters of the tollway – something I never do. I used to work for Central Market many moons ago; I know exactly where I’m going and yet, we found ourselves barely arriving at nearly 5pm.

I’d missed it. I had missed my chance at being in the presence of an authentic culinary guru.

I didn’t care. I got out of the vehicle, quickly made my way in, and wrapped around the hidden stairs at the entrance. Straight up to the culinary school, determined to keep after the goal, I went – all while Bianca aggressively whispering, “We can’t go up there! It’s a private event!”

There he was. Standing at the top of the stairs, with a glass of wine in the middle of a group of people was the chef who had lifted my hesitation and breathed a draft of wind into the embers of my partially fulfilled culinary dreams, like a wooden bellow tending to its fire.

“I’m not coming up there,” whisper-shouted Bianca, as she poked her head around the corner of the stairs. I retreated back down and told her that she HAD to come up! I wasn’t going to let this moment pass, and someone had to take a photo!

Just as I got right back up to the top step, he had broken away from the crowd and was standing no less than two feet away from me and heading towards the hallway. So, I called out to him, “Chef Mallmann!”

With a beautiful grin and what appeared to be a sincere interest, he spoke with me for a few moments and allowed for a photo. I honestly can’t even remember if I told him my name, but what I do remember is that I did thank him for his inspiration, told him that I’d seen his tweet and that I knew I had to come meet him. 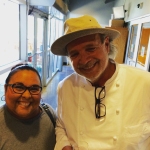 While we should all understand that our strengths and abilities to achieve our dreams stem from our own ability to believe in ourselves, I am exceptionally grateful for the hand that destiny lent yesterday. Everyone needs a little inspirational reminder now and then to usher us along our path of destiny. Perhaps, the power grid session sparked more than I expected. I could not have imagined a better 24 hours of encouragement.