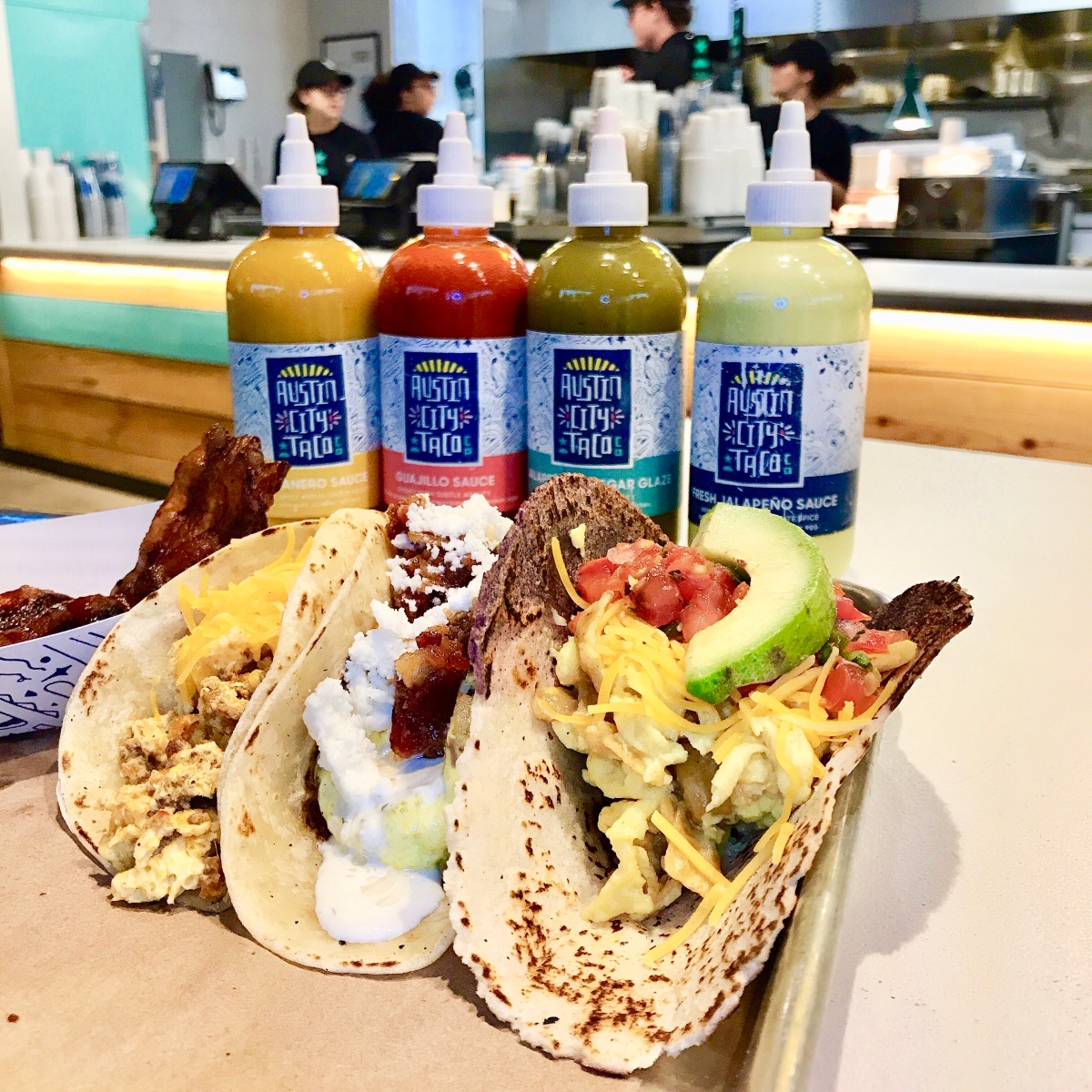 Every now and again, I make a sacrifice to demonstrate why I reign as OMG of the DFW, Second of My Name (was named after my Grandma Ollie), Slayer of Breakfast Tacos — and Mother of Panthera Onca Parvus (Mouse and Crazy).

Couple of weeks ago, I was scheduled to interview Juan Rodriguez, Austin City Taco Co. culinary director. Due to scheduling conflicts on my part, I ended up just popping into the Fort Worth taco joint on my own to see what all the hubbub was about (sorry we missed ya, Juan).

Let me be clear. I wasn’t there to try anything outside of the breakfast taco genre. Everyone’s already written a ton about their Austin-influenced combinations. What I was interested in was their non-traditional takes on the breakfast taco.

Would they eff up the basics, like chorizo and egg? Would my beloved potato and egg arrive as mashed potatoes and a squiggly line of black beans? Had I risen at the crack of dawn and driven 45 minutes from home only to return disappointed and in need of crafting my own breakfast tacos??? I would soon find out. 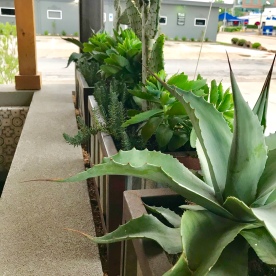 They tell you exactly who they are — an homage to Austin and their taco scene — which is sort of why I was a little worried when it came time to the tasting bit — because we all know how I feel about Austin’s breakfast taco game.

Gotta say, I loved the vibe. Plus, their assistant manager Drew and the morning crew at Austin City Taco Co. delivered the best-improvised tour of the joint. Even from my short interactions, I could tell they were huge fans of the product and the brand — which is always a good sign.

Their breakfast taco menu is short and sweet — thank God. Migas (which I’ve never understood but enjoy), Bacon and Egg, Chorizo and Egg, Potato and Egg, and the Midnight Craving, a kitchen-sink approach to the breakfast taco.

The Midnight Craving sort of reminded me of the “everything,” “hurricane,” or “suicide tacos” that I grew up with in South Texas — but fancier. Ain’t no one serving up “bacon jam” back home. However, I admit this was a glorious and winning combo of eggs, brisket, potatoes, queso fresco, bacon jam, buttermilk ranch, all nestled inside of a fresh, scratch-made flour tortilla.

The Migas taco arrived in a half blue corn and half flour tortilla set up, and it was pretty darn delicious.

The pop of lime from the fresh salsa paired with the creamy avocado perched perfectly above the mountain of migas was downright delightful. Not to mention, that half blue corn tortilla was the shiznit.

And, that Chorizo and Egg??? Well, they let the chorizo speak for itself, and it said, “Te quiero mucho, amorcito mío.” (issa good thing) 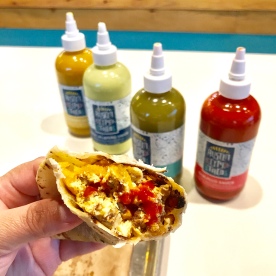 I think, though, my favorite part of the visit was getting a couple of slices of bacon just because. We didn’t order the Bacon and Egg, but Drew insisted we needed to check out the bacon.

People, they candy their bacon lightly with brown sugar. Heavenly.

Look, I’m a stickler for traditional breakfast tacos, but the thing is, these guys aren’t pretending to be your local taqueria. If you didn’t like their tacos, then pay more attention. 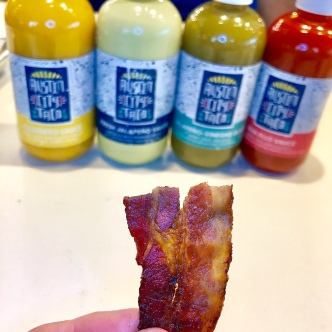 Drew kept talking up the fact that all they want to do is serve good food. They’re upfront about the fact they’re not in it to set trends or serve up traditional anything — they simply wish to deliver hot, fresh quality flavors like “the cravings you want right now,” and that’s exactly what they served up.

So, while I still prefer the more traditional breakfast taco of San Antonio and South Texas, there’s no reason to hate on Austin City Taco Co. They’re not claiming to be anything but delicious — and I can attest that they are exactly that. Go get you some. It was definitely worth the drive.

LET’S KEEP IT REAL: First and foremost, I do everything for the love of food. Most of what I write about is because I love it! If I don’t love it, I tell you about that, too. From time to time, I may receive monetary or product compensation for mentioning products, offering recommendations, providing endorsements, or including links to products or services when I blog. While that may be the case for some posts, it is not the case for all. When it’s sponsored, you’ll see #sponsored in the social media post announcement. When I’m just sharing the love, I won’t use that particular tag or hashtag. What you need to know is that I only give shout outs when I actually use the product or love it so much it deserves a shout out, sponsored or not.

Verify Road Trip’s Breakfast Capital of Texas show was back on the air this week, and we’ve started up the conversation again. So, here’s a repost of the original Breakfast Taco Battle post right before the original air date – with an edit to remove the original air date from September 2016. Catch my submission video and behind the scenes info, too! Most importantly, pick up a breakfast taco this morning. You need one. I’m frying up some bacon right now. END_OF_DOCUMENT_TOKEN_TO_BE_REPLACED 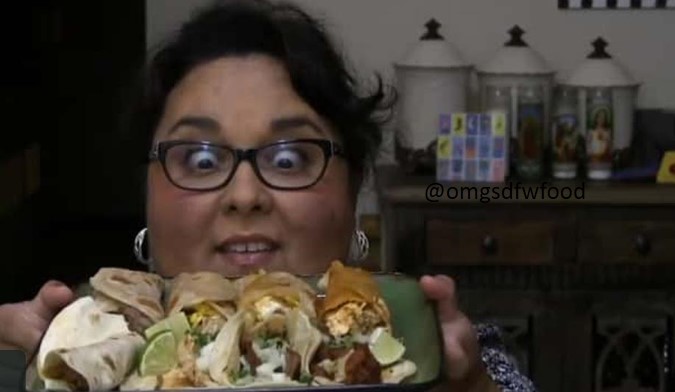 My head’s about to explode.

Four days ago, I was scrolling down Facebook and noticed a video in my feed with the title, “Are you a foodie?”

Naturally, I hit pause on the cat video and clicked on the foodie link. It was ABC affiliate WFAA’s David Schechter and a producer, Alex Krueger, asking for one foodie viewer to join them on a road trip to help determine the true breakfast taco capital of Texas.

If ever there were a task I was thoroughly qualified to exceed at, this was it.

To be chosen, you had to fill out a three-question survey and submit a video talking about why you should be the one taking up that last seat in the mini-van.

Here’s how it went down…

YOU HAVE ONLY ONE HOUR TO SAVE THE WORLD FROM A ZOMBIE ATTACK, WHAT DO YOU DO?
I would fry bacon, eat the bacon, and use the hot, rendered fat as a weapon against the zombies, in the hopes that I wouldn’t run into any vegan zombies where pork fat as a weapon would clearly be futile. I would leverage social media and the news outlets to spread the word and help others defend the world using the same method. This way, no matter what happened, people would either die happy or at least not waste pork fat before dying.

WHAT WAS YOUR MOST MEMORABLE MEAL?
In Madrid, Spain, we were fortunate enough to eat at the oldest restaurant in the world, Restaurante Botín. It opened its doors in 1725, and there’s a reason it’s still open and even made its way into Hemingway’s novels. The crisp skin of the roasted suckling pig (cochinillo asado), the fascinating subtleties of the blood sausage (morcilla), the deeply rich and creamy chicken/ham croquettes (croquetas), and the noble cured ham (jamón ibérico) were like food of the gods. Sitting in those tiny chairs, pressed up next to our neighboring tables, listening to Madrileños whip their way through conversations, purposely closing my eyes with every succulent bite, imagining that very room where thousands of patrons had enjoyed a very similar experience… it was something I will never forget.

WHO IS YOUR ROLE MODEL AND WHY?
Wow. Where do I start? So many colorful spices have been simmering a long time in the magical sauce that’s my life! Caroline McNinch, my smoking, 400 pound, denture-wearing, narcoleptic babysitter, introduced me to the poetry of James Whitcomb Riley when I was just four years old and spent hours teaching me the magic of spoken poetry, all while making the most amazing potato bread that she would promptly toast with a pat of butter straight from the oven. Once seated at the red, retro four-top in the middle of her tiny kitchen, we would swap turns coating the still-warm pillowy delight with sweet, homemade blackberry jam. She taught me how to enjoy life and find joy and humor in all things. My Grandma Ollie still inspires me today at age 97. She’s a pistol and loves to party. Frying bacon in a cast iron skillet on a brisk and fog-laden early morning at the ranch, my Grandma would have five-year old me watch from a stool as she prepared my Grandpa’s breakfast. She taught me love comes in many forms and can be leveraged as a seasoning. And, quickly after breakfast was done, she and my Grandpa would head out to work the ranch, teaching me hard-work and discipline combined with laughter, song, and love. My Grandpa was a World War II veteran and instilled a respect for our country and a passion for education in each of us. He introduced me to PBS, long before cable came to our town, and there I met Julia, Jacques, Rick, Paul, Lidia, Jeff, Martin, Ming, Charlie, Joanne, Sarah, Daisy, and many, many more amazing chefs, all focused on teaching me magnificent skills! I was hooked.

I was incredibly fortunate to have such powerful role models lay the groundwork for me at such an early age. While I could say I’ve been inspired by many a talented and remarkable chef, leader, and mentor, by far, the most inspirational were the ones who nurtured the sparks they could see when creativity met food met love met me.

Don’t worry – I won’t embarrass the family… or maybe I will… nowadays that makes for good television.