Don’t ever go to the K-Roger when you’re hungry and they have a sale on pork.

This was delicious. I’ve had about what seems like 16 different meals from that little pork chop incident at the store. But, this was, by far, the best.

1 tsp Truvia (use sugar if you roll like that)

1 TBS Sambal (sub Sriracha if it floats your boat)

2 green scallions, roughly chopped (are there other colored scallions? why do we say green?)

Place the fish sauce, Truvia, sambal, garlic cloves, green scallions (not the orange ones), cilantro, and oil into a mini food processor and zap until the ingredients create a loose paste/marinade. Set aside.

Place the thinly sliced pork into a gallon-sized resealable plastic bag, season pork with salt and pepper. Add the marinade into the bag over the pork. Remove air from bag by carefully rolling up the bag a bit and then sealing the bag. Once the bag is tightly sealed, massage the bag with your hands or roll around on the counter until the pork is completely covered with the marinade. Set aside.

Heat a skillet to medium-hi temperature. Butter the interior four sides of the halved demi baguette and place the baguettes open-side-down onto a skillet to toast. If you don’t butter your bread, why are you in the kitchen? Get out. You don’t deserve this Bahn Mi.

Once the buttered baguette is toasted, remove from skillet and set aside.

Open bag of marinating pork and add to skillet to cook. Increase heat to sear pork on all sides, stirring infrequently to ensure browning occurs. For best results, use a cast iron skillet.

While the pork is browning, you can use this time to make a quick pickle of cucumber and carrot for the Bahn Mi topping. Super easy. Ready?

Slice matchsticks of one carrot and one cucumber. Add to a bowl, add 1/4 cup of rice wine vinegar, 2 tsp of Truvia, and season with salt and pepper. If you want, throw in a little cilantro. If you’re daring, throw in a few slivers of jalapeño. You’re welcome.

Back to the Bahn Mi. Once the pork is cooked through, remove from heat and set aside. Grab your BUTTERED and toasted baguettes, and smear some hoisin sauce on each side. Add a healthy amount of pork to the sandwich, top with your sweet and spicy pickled veggies, and don’t tell me I never brought anything good into your life.

Winner, winner Turkey Pastrami Dinner! Or, lunch, as it were!

In the spirit of doing everything possible to win a sandwich making contest, here’s another entry I submitted, and it is SOOOOOOOOOO GOOOOOOOOOOD! Plus, I got to do my best Giada impression when I made my recipe video. “SO-pre-SSA-ta!” END_OF_DOCUMENT_TOKEN_TO_BE_REPLACED

Every year, D Magazine puts out a “Best of Big D” list – it’s basically a “where to find the shiznit” list of anything and everything in Dallas. It was no surprise this year when Empire Baking Company was named Best of Big D Bakery for Bread. Having run full-production bakeries in a past life and having been schooled on more than one occasion by some of the most passionate, tattoo-covered, lovable, foul-mouthed, “bread is life,” under cover of night, master baker beasts, I can tell you, Empire has some killer bread.

So, as you can imagine, when Empire’s blog posted a Back to School Sandwich contest focused on using their bread, I was all over it. The contest ends Friday, August 19th; so, I still have another day to submit more sammies, but this one deserves to be shared even if I don’t win. The rules are: 10 ingredient limit, serve cold/room temp, and make it simple, nice, and tasty. Here’s what I came up with… 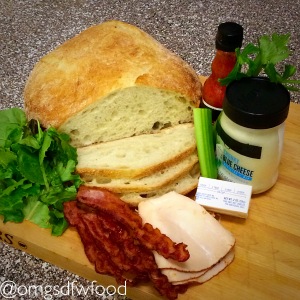 Servings: Yours and Only Yours
Time: 10 mins
Difficulty: Easy

Cook your bacon until it’s crisp, set aside the bacon, and discard the bacon renderings. Or, save the renderings if you know what’s good for you. Don’t wipe out the skillet! Just be patient, my friends. Glorious deliciousness awaits you. Take the skillet off the heat for this next part. Mix the Buffalo sauce and the softened butter together just to combine. Don’t freak out when the vinegar doesn’t play nice with the butter. Just keep stirring around to incorporate most of the sauce. Then, take a butter knife and slather one side of each Pane Paisano slice with the Buffalo butter (I like that – “Buffalo butter”), then place the buttered side down in the skillet where you cooked the bacon. Then, return the skillet to medium-high heat to toast up only that one side of bread. That’s right. I said one side only. You’ll see…

Once the one side is golden brown, remove from the skillet, and place the two slices of bread aside, leaning on one another to cool. This just makes the process go faster. While your two toasted slices are cooling, take your celery stalk, and slice it thinly on the bias. The idea is that you’ll be adding the celery for texture, but it can’t fall out of the sammy. Thus, no dicing.

Once the Pane Paisano slices are cooled, place them toasty side down, and spread the chunky blue cheese dressing onto the soft side of the bread. The softer side will absorb the blue cheesiness, and the chunks of blue cheese will fall into the wonderful crevices and pockets of joy in the bread. If you had toasted both sides, you’d have to smush the crispy bread to spread the blue cheese. See? There you go. One-sided toasting is muy importante for this sammy.

Now, take your thinly sliced celery, and cover one side of the sammy, making sure you are strategically placing the celery so that every bite gets that textural crunch. The blue cheese will act as your glue here so the celery won’t slide off. 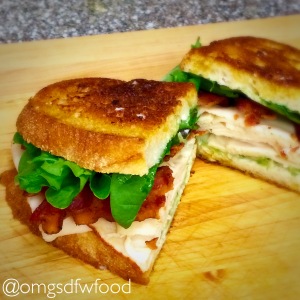 Next, layer your Buffalo chicken deli slices, bacon, and baby spring mix. Close up the sammy with the other slice, and enjoy the tangy zing of the Buffalo sauce against that creamy blue cheese and salty, smoky bacon. I can’t wait to turn this bad boy in for the contest… wish me luck!